The 17 days Custom Discovery tour offers you to discover the top historical cultural and religious places. Nepal is a small and beautiful country. People are peace-loving. Due to its multi-ethnicity and three distinct land features, namely, Himalaya, Hill, and Terai, it is a multi-cultural, multi-lingual, and multi-religious country. And hence it has a plethora of customs and traditions, each so rich and distinctive.

What’s more, they are well reflected in the country’s arts, architecture, historical and cultural monuments. The custom discovery tour is impeccably designed and planned to satiate your thirst for custom discovery.

The journey will take you across historical and cultural sites of Kathmandu Valley, Nagarkot, Pokhara, Tansen, and Lumbini. Each place is pretty different from another; obviously so in people’s customs and traditions. In addition to it, these places are culturally rich, and they have historical significance. It is splendidly displayed in their monuments, temples, and several cultural and historical sites. For instance, the Swoyambhunath Stupa has an exciting myth for how it came to be. It is linked to the creation of Kathmandu Valley out of the primordial lake. The Kathmandu Durbar Square, the Pathan Durbar Square, and the Bhaktapur Durbar Square will tell you the history of  three different medieval states co-existing in the Valley. Upon visiting different places and sites in the Valley, you will get to know the social practices of aboriginals as well as immigrants. Interestingly, Bhaktapur is called the ‘city of culture’. It is a living heritage. Besides, the Pashupatinath Temple in Kathmandu is the holiest pilgrim site for the Hindus all over the world. Furthermore, the Kopan Monastery and the Boudhanath Stupa are unmissable.

Unlike Kathmandu Valley, the city of Pokhara is adored for its natural beauty such as Fewa Lake, Begnas Lake, Rupa Lake, views of several mountain peaks, Devi’s fall, Gupteshwori Cave, Mahendra Cave, World Peace Stupa. A 5-hour scenic drive from Pokhara will take you to Tansen, a culturally rich spot. It is an ancient town that will offer you the view of spectacular mountain peaks like, Dhaulagiri, Annapurna, and Manaslu. You will be further driven to Lumbini, the birthplace of Lord Buddha. It is a fantastic place with a lot of monuments, monasteries, stupas, and antiquities related to Gautam Buddha.

Day 01: Arrive in Kathmandu airport and you will be transferred to the hotel by one of our representatives. Welcome dinner at one of the traditional Nepali restaurants in Kathmandu.
Overnight: Hotel
Elevation: 1334m

Day 02: Visit Patan and Swoyambhunath: start our tour with the magnificent Swoyambhunath which is 10 minutes drive from Thamel. Then a short drive to one of the oldest cities of Kathmandu valley which is called Patan to witness its incredible architecture from medieval period.

Patan- the second largest town in the valley is situated to the south of Kathmandu. Patan's great building boom took place under the Mallas in the 16th, 17th and 18th centuries. Numerous temples of widely diverse styles, as well as many Buddhist monasteries, are scattered around the fascinating town. Patan is famous for its crafts and metal works which are wonderful souvenirs.
Overnight: Hotel

Day 03: Drive Kathmandu to Bhaktapur via Thimi: today we drive to the oldest part of the Kathmandu valley, a quick stop at old Thimi and observe some traditional farming and old alleys of Thimi village. Then finally we go to visit an ancient city called Bhaktapur. This fascinating city reminds you the true culture and living style of medieval period.

Bhaktapur- Located about 20 km east of Kathmandu in the Kathmandu Valley, Bhaktapur is known as the 'City of Devotees', the 'City of Culture', the 'Living Heritage', and 'Nepal's Cultural Gem'. It is one of the 3 royal cities in the Kathmandu Valley. We visit four different squares in this city: Durbar Square (palace square), Tamaudi Square (public square), Pottery Square and Dattatrey Square.
Overnight: Hotel

Nagarkot – One of the most popular hill station / viewpoints close to Kathmandu valley, reward would be the  panoramic view of 33 different mountain peaks of different ranges including Mt. Shisapangma of Tibet.
Overnight: Hotel

Pashupatinath Temple is one of the holiest pilgrimage destinations for all the Hindus of the world. The temple is dedicated to Lord Shiva, one of the trinity and the guardian (patron) deity of Nepal. This is one of the oldest temples, situated on the banks of the Holy Bagmati River. It is a double–roofed golden temple with four triple silver doorways. Pashupatinath covers an area of 281 hectares, which is one of the biggest temple complexes in Nepal.

Bouddhanath Stupa lies about 6 km east of downtown Kathmandu and it is the largest stupa in the Valley and one of the largest in the world. It presents one of the most fascinating specimens of stupa design with hundreds of prayer wheels and 108 small images of Buddha all around. Just like Swoyambhunath, this stupa has four sides with the watchful eyes of Lord Buddha. All the Buddhists throng to this stupa to take part in the sacred rituals during the Buddhist festivals.
Overnight: Monastery

Day 06: Visit Kopan Monastery: hike for an hour to Kopan monastery through few villages and winding roads. Kopan is situated at a hill of Kathmandu valley about 2 km north from Boudhanath stupa. It is the first monastery in Nepal which started to teach Buddhism and Buddhist meditations in foreign language.
Overnight: Monastery

Day 07: Flight Kathmandu to Pokhara (820m) and trek to Astham: a scenic flight to Pokhara for about 30 minutes then drive about an hour to Milan chock where we start our short trek to Astham, Adhikari family home. Being in Astham, we can observe and experience real culture and living style of typical Nepali family of country side.
Overnight: Home stay

Day 08: Trek Astham to Milanchok and drive to Sedi Bagar: hike back to Milan chock then drive for an hour to Sedi Bagar followed by a short walk to Thapa family home which offers magnificent view of the lake and surroundings.
Overnight: Home stay
Driving Time: 1 Hour

Day 09: Visit Sarangkot (1592m): early morning drive to Sarangkot; It’s about half an hour drive and 2 hours trek back. (You can drive back if you don’t want to hike) The view from Sarangkot is superb. Several different peaks of the Annapurna and Dhaulagiri ranges, including the two highest peaks in the world,-Annapurna I (8091m) and Dhaulagiri (8167m) can be seen.
Overnight: Home stay

Day 10: Drive Sedi Bagar to Pokhara: drive back to Pokhara and settle down at Temple Tree Resort. In the afternoon, we visit Devi’s fall, Guptesori Cave and World peace stupa; which offers you the best view of the Pokhara city and Fewa Lake.
Overnight: Hotel

Day 11:  Visit Mountaineering Museum and Mahendra Cave: start the day with the visit of first Mountaineering museum in Pokhara, where we can learn about the history of Nepal mountaineering and witness true mountaineering culture. Then we visit a cave in the afternoon which is about 5 km away from Lake City. It is one of longest caves in Nepal.
Overnight: Hotel

Day 12: Drive Pokhara to Tansen (1090m):  a scenic drive for about 5 hours. We drive through several small traditional towns and the view of the mountain peaks from some of the hills on the way are superb. We arrive in Tansen by early afternoon. We drive through the winding narrow road of Tansen Bazaar to get to our hotel, which is situated right on the top of the village with the magnificent view of the mountain ranges. In the afternoon we visit Tansen Bazaar, Tansen Durbar (Palace) and other surrounding temples.

Tansen is a small ancient hill town situated 1090 meters above sea level. It is located in Palpa district of western region of Nepal. The highlights of the Tansen are its' ancient culture, excellent mountain views, serene atmosphere and friendly people. Tansen is really popular for its pleasant weather so it is considered good place to visit in any season. The spectacular view of the mountain peaks including Dhaulagiri, Annapurna, Manaslu and other peaks can be seen from Tansen.
Overnight: Hotel

Day 13: Drive Tansen to Lumbini: start our day with 10 minutes walk to Srinagar hill to catch sunrise over the magnificent mountain ranges. Then, quick breakfast and explore surrounding areas (if you are interested). Then we drive for about 3 hours to Lumbini, birthplace of Lord Buddha.

In the afternoon, visit Maya Devi Temple; exact birth place of Gautam Buddha. Maya Devi temple is built right on the place of his birth. The temple is built in modern design, however inside the temple; they have preserved exact structure of the place/stone where he was born.

According to the legend, his mother; queen of Kapilbastu was on her way to her parental house to visit her parents and all of sudden, she was struck with labor pain and she asked her servants / care takers to take her back to the palace but pain was unbearable so she decided to rest on the shade of the banyan tree nearby, where she gave birth Gautam Buddha.

We also visit some of the temples and stupas built by different nations dedicated to Lord Buddha.
Overnight: Hotel

Day 14: Visit Kapilbastu: start our tour early in the morning driving about 28 km west of Lumbini to visit the palace of Shakya dynasty.  Gautam Buddha spent 29 years of his life with his family in this palace as a prince. Even though he was a prince of the kingdom, he was different than rest of the royals and he was curious about the real world, which scared his family and his father, the king of Kapilbastu. King wanted his son to become future king and rule the country so he wanted to train his son as a future king not as someone who would go outside and try to get knowledge as a scholar and become a monk. So king arranged all the physical luxury possible in the world right inside the palace so his son wouldn’t know about the poorness and cruelty of the real world outside of palace.
In the afternoon, we visit rest of the temples in Lumbini garden.
Overnight: Hotel

Day 16: Visit Kirtipur: In the morning we visit Kirtipur, one of oldest and historical towns in Kathmandu valley.
Overnight: Hotel

Day 17:  Transfer to the airport and departure 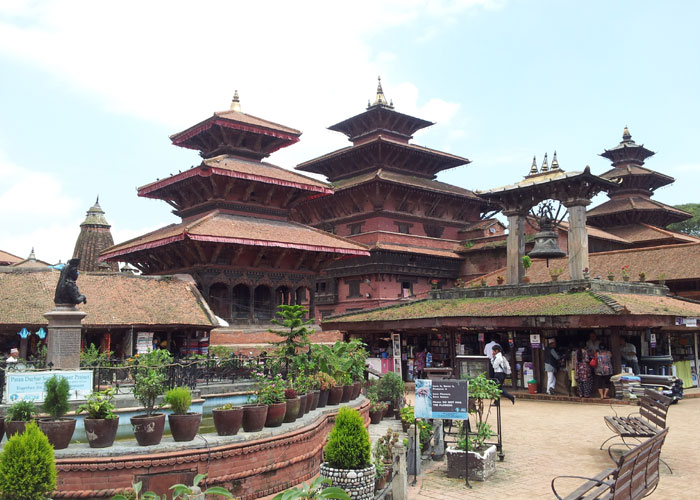 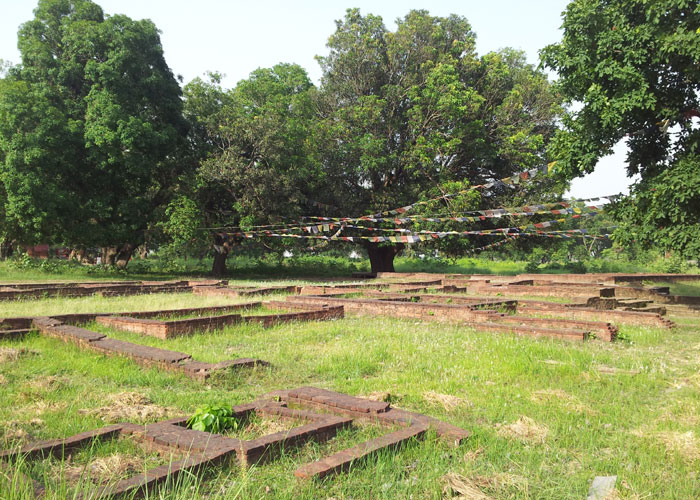 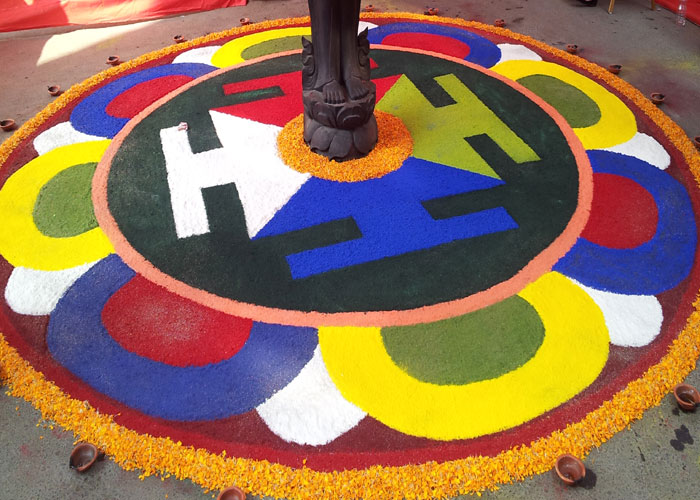