Glimpse of the Valley – 9 Days

Food is reasonably one of the best ways to have a glimpse of the respective culture. It tells considerably enough. And thus, your welcome dinner at a traditional Nepali restaurant in Kathmandu will be a delightful experience of taste and culture. This short and sweet, but sweeping tour will begin with a visit to a magnificent stupa called the Baudhanath, followed by a drive to Patan that will bring you a medieval period through arts, crafts, and monuments. Further, you will travel to Nagarkot, a popular hill station, that will give you a magnificent view of 33 different mountain peaks, but the way to Nagarkot will be through a culturally amazing city, Bhaktapur. It is also called Living Heritage and the City of Culture.

This glimpse of valley tour is packed richly with wonder. You will trek to Changunarayan to see the oldest manuscript in the history of Nepal, and some beautiful temples. The city of Pokhara after a scenic drive from Kathmandu will be a pretty unique experience in terms of what it has to offer. Boating in the Fewa Lake will be pleasant, peaceful, and thrilling. Devi’s fall will be tantalizing and Gupteshwori Cave will fill you with awe. And, it will be a wonderful experience to view different mountain peaks of the Annapurna and the Dhaulagiri ranges from Sarangkot, a viewpoint. Hitherto, you have left Kathmandu unexplored. It is a culturally and opulent city. A scenic flight from Pokhara will bring you to Kathmandu. You will tour the Swoyambhunath and the Kathmandu Durbar Square, both the world heritage sites.

With a huge white dome stupa surrounded by beautiful smaller shrines, the Swoyambhunath is spectacular and extensive. It is one of the holiest Buddhist pilgrim sites in the Valley. But the Kathmandu Durbar Square is a marvel at a different level. The square has several temples, ancient cultural and historical monuments. They are artistically rich and architecturally distinctive. Moreover, Pashupatinath Temple, Hanuman Dhoka, Budhanilkantha Temple are some other attractions of Kathmandu.

The tour offers much more wonder and awe than mentioned. It cannot be truly expressed, so we would like to help you discover it.

Day 01: Arrive at Kathmandu airport and you will be transferred to the hotel by one of our representatives. Welcome dinner at one of the traditional Nepali restaurants in Kathmandu.
Overnight: Hotel
Elevation: 1334m

Day 02:  Visit Boudhanath and Patan: start our tour with the magnificent stupa called Boudhanath which is 30 minutes drive from Thamel. Then we drive to Patan to witness its incredible architecture from the medieval period. Since we would be staying in Patan, we can explore all the small alleys of this historical city. We spend a night in a traditional Newari house running by a Newar family as a guest house.

Boudhanath Stupa lies about 6 km east of downtown Kathmandu and it is the largest stupa in the Valley and one of the largest in the world. It presents one of the most fascinating specimens of stupa design with hundreds of prayer wheels and 108 small images of Buddha all around. Just like Swoyambunath, this stupa has four sides with the watchful eyes of Lord Buddha. All the Buddhists throng to this stupa to take part in the sacred rituals during the Buddhist festivals.

Patan- the second largest town in the valley is situated to the south of Kathmandu. Patan's great building boom took place under the Mallas in the 16th, 17th, and 18th centuries. Numerous temples of widely diverse styles, as well as many Buddhist monasteries, are scattered around the fascinating town. Patan is famous for its crafts and metal works which are wonderful souvenirs.
Overnight: Hotel

Day 03: Drive Patan to Nagarkot via Bhaktapur: drive for about 30 minutes to visit a magnificent city called Bhaktapur. Then, another hour drive to Nagarkot.

Bhaktapur: Located about 20 km east of Kathmandu, Bhaktapur is known as the 'City of devotees', the 'City of Culture', the 'Living Heritage', and 'Nepal's Cultural Gem'. It is one of the 3 royal cities in the Kathmandu Valley. This fascinating city reminds you of the true Nepali culture and living style of the medieval period. It is one of the oldest, ancient cities and previous capital city of Kathmandu Valley. We will visit four different squares in this city: Durbar Square (palace square), Tamaudi Square (public square), Pottery Square, and Dattatrey Square.

Nagarkot – One of the most popular hill station/viewpoints close to Kathmandu valley. The reward for the Nagarkot trip is the panoramic view of 33 different mountain peaks of different regions including Mt. Shisapangma of Tibet.
Overnight: Hotel

Day 04:  Trek Nagarkot to Changunarayan and Drive to Kathmandu: we enjoy the sunrise over the magnificent mountain peaks then we drive for 20 minutes down to Telkot and start our trek to Changunarayan where we catch our vehicle for Kathmandu.

Changunarayan - is a fascinating place where you can see oldest Manuscript found in Nepali history and some magnificent temples.
Overnight: Monastery

Day 06:  Drive Sedi Bagar to Pokhara and visit Devi's fall, Gupteswori cave, and World peace stupa: We drive back to Pokhara and check into our hotel then we start our day visiting Devi’s fall, a waterfall goes into a deep canal than a visit to Gupteswori Cave then another short drive followed by a short hike to World peace stupa which offers you the best view of the Pokhara city and Fewa Lake then we hike down to Fewa Lake and cross the lake on a boat.
Overnight: Hotel

Day 07: Visit Sarangkot, Mountaineering Museum, and boating on Fewa Lake: early morning drive to Sarangkot. It’s about an hour's drive on a winding road. The view from Sarangkot is superb. Several different peaks of the Annapurna and Dhaulagiri ranges, including the two highest peaks in the world,-Annapurna I (8091m) and Dhaulagiri (8167m) can be seen.

Then, we drive back to Pokhara and have breakfast then continue our tour visiting Mountaineering museum, which gives a great opportunity to know about the history of mountaineering in Nepal. Then we go for a couple of hours boating on Fewa Lake.
Overnight: Hotel

Day 08: Flight Pokhara to Kathmandu (1334m): a panoramic flight back to Kathmandu for about 25 minutes which offers you a spectacular view of Annapurna and Manaslu ranges.

In the afternoon, we visit Swoyambunath and Kathmandu Durbar square.

Swoyambunath is one of the oldest stupas of the Kathmandu Valley. It is situated on one of the highest hills in the valley. It watches over the Valley from the top of a hillock on its western side just three kilometers west of the city center. The stupa is one of the holiest Buddhist sites in Nepal and its establishment is linked to the creation of the Kathmandu Valley out of a primordial lake. Swayambhu is also known as Samhengu and is recognized as a World Heritage Site. It is also one of the oldest and most glorious Buddhist shrines in the world which is said to be two thousand years. The four sides of the stupa are painted with the eyes of Lord Buddha.

The Kathmandu Durbar Square holds the palaces of the Malla and Shah Kings who ruled over the city. Along with these palaces, the square also surrounds quadrangles revealing courtyards and temples. The square is presently known as Hanuman Dhoka, a name derived from the statue of Hanuman, the monkey devotee of Lord Ram, near the entrance of the palace. The preference for the construction of royal palaces at this site dates back to as early as the Licchavi period in the third century. When Kathmandu City became independent under the rule of King Ratna Malla (1484-1520) the palaces in the square became the royal palaces for its Malla kings. When Prithvi Narayan Shah invaded the Kathmandu Valley in 1769, he also favored the Kathmandu Durbar Square for his palace. Other subsequent Shah kings continued to rule from the square until 1896 when they moved to the Narayan Hiti Palace. One of the most visited sites in the square is the house of the Kumari (a living goddess who is the reincarnation of Kali).
Overnight: Hotel

Day 09: Transfer to the airport for departure. 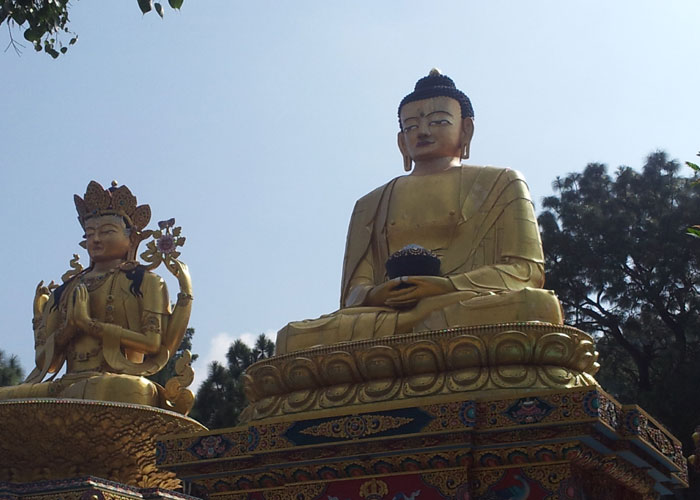 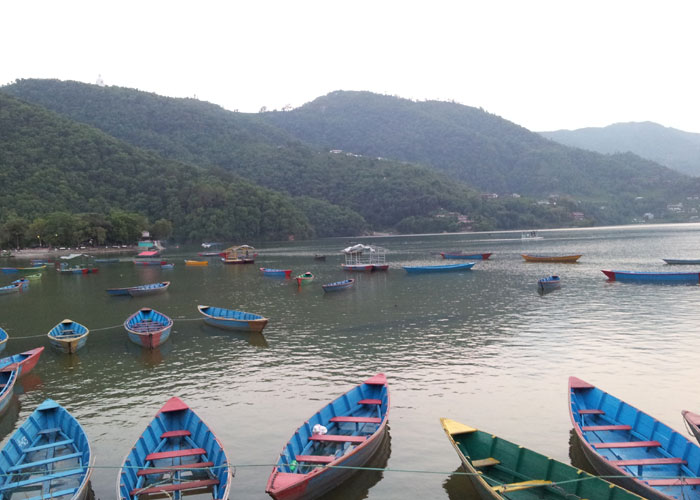 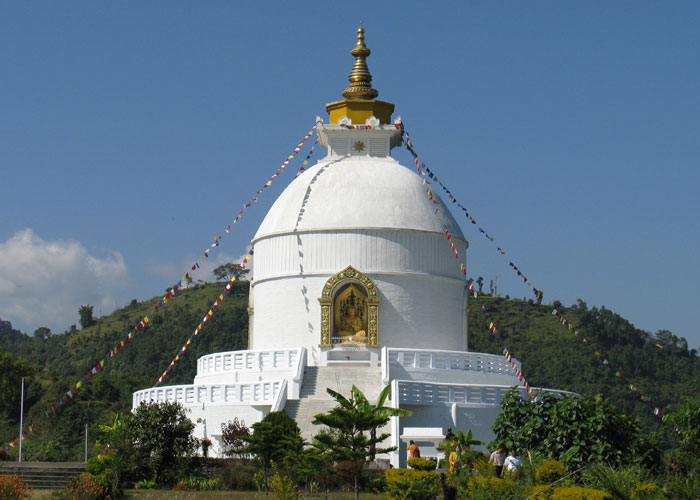