Buddhist Cultural Tour in Nepal is one of the tops searched cultural tours for pilgrims and those who strongly follow Buddism, path of peace shown by the Lord Gautam Buddha.  Buddhism is one of the major religions in Nepal after Hinduism consisting of approximately 10 percent of the entire population.

People of Tibeto-Baram speaking ethnicities are the major preacher and follower of Buddhism whose philosophy is totally based on the principle of non-violence and peaceful co-existence. Although only about 10 percent of Nepali are Buddhist, Nepal has many wonderful and artistic stupas and shrines that are significant at the International level. Swyambhunath, Bouddhanath, and Lumbini Nepal offer three world heritages sites just dedicated to Buddhism within its such small territory.

The reason behind to be the best destination of the Buddhist Cultural tour in Nepal is because  Nepal offers thousands of Small and big shrines and monasteries decorated at its unique style to reflect Buddhism and its long-lived history since the birth of the Lord Gautam Buddha.

Swyambhunath located in the heart of the country capital, also known by the name of monkey temple among the visitors is believed to be the of the oldest stupa in the world carrying the history dating back to the early Lichhivi period similarly one can also find Bouddhanath which is among the holiest places for the all the Buddhist around the world. (…..See more sightseen in Nepal)

Among all Lumbini carries the most significant role in identifying Nepal as a Buddhist country as it is the exact birthplace of Gautam Buddha.

Here the visitor can see the Ashoka pillar erected by Emperor Ashoka of India to mark the exact birthplace of Siddharth Gautam Buddha who later left his palace and luxuries of life in search of Inner peace and the reason of suffering.

Lumbini has numerous shrines and stupas constructed by various nations in their indigenous styles to mark and support Nepal as a country of Gautam Buddha. Maya Devi Temple, World Peace Pagoda, Myanmar Golden Temple, Ashoka Pillar, Lumbini Crane Sanctuary, Bodhi tree, etc are major tourist attractions of Lumbini for which it was listed in world Heritage Site by UNESCO in 1997.

Besides world heritages sites visitors can see many Buddhist shrines including Namo Buddha, Ramagrama stupa, Koliya, Patan Durbar Square, Halesi-Maratika Caves which carry their history and art. If somebody wants peace in Nature and meditate to search the inner soul and identify themselves, Nepal is the perfect place in the entire globe because Buddhism in Nepal exists in its purest form untouched and undisturbed my chaotic modern world.

Day 01: Arrive at Kathmandu airport and you will be transferred to the hotel by one of our representatives. Welcome dinner at one of the traditional Nepali restaurants in Kathmandu.
Overnight: Hotel
Elevation: 1334m

Day 02: Visit Swoyambhunath and Patan: start our tour with the magnificent Swoyambhunath which is 10 minutes drive from Thamel. Then a short drive to one of the oldest cities of Kathmandu valley which is called Patan to witness its incredible architecture from the medieval period.

Patan- the second largest town in the valley is situated to the south of Kathmandu. Patan's great building boom took place under the Mallas in the 16th, 17th, and 18th centuries. Numerous temples of widely diverse styles, as well as many Buddhist monasteries, are scattered around the fascinating town. Patan is famous for its crafts and metal works which are wonderful souvenirs.
Overnight: Hotel

Day 03: Drive Kathmandu to Bhaktapur via Thimi: we drive to the oldest part of the Kathmandu valley, a quick stop at old Thimi on our way, and observe some traditional farming and old alleys of Thimi village. Then finally we go to visit an ancient city called Bhaktapur. This fascinating city reminds you of the true culture and living style of the medieval period. The guest house where you would be staying is right at the main square so it gives you enough opportunities to observe all the magical parts of this ancient city.

Bhaktapur- Located about 20 km east of Kathmandu in the Kathmandu Valley, Bhaktapur is known as the 'City of Devotees', the 'City of Culture', the 'Living Heritage', and 'Nepal's Cultural Gem'. It is one of the 3 royal cities in the Kathmandu Valley. We visit four different squares in this city: Durbar Square (palace square), Tamaudi Square (public square), Pottery Square, and Dattatrey Square.
Overnight: Hotel

Day 04: Drive Bhaktapur to Nagarkot via Changunarayan: drive to one of the oldest temples of the valley, Changunarayan before we head to Nagarkot. It is a fascinating place where you can see oldest Manuscript found in Nepali history and some magnificent temples. Then, an exciting drive to Nagarkot for an hour on winding road. It is a great place to escape from Kathmandu’s hustle-bustle.

Nagarkot – One of the most popular hill station/viewpoints close to Kathmandu valley. The reward for Nagarkot trip is the panoramic view of 33 different mountain peaks of different regions including Mt. Shisapangma of Tibet.
Overnight: Hotel

Day 05: Drive Nagarkot to Kathmandu and visit Pashupatinath and Boudhanath: on our way back from Nagarkot, we trek down to Thali, which takes about 4 hours. Then, catch our vehicle to drive back to Kathmandu. We visit Pashupatinath and Bouddhanath on our way back. In the evening, participate in the Buddhist puja ceremony at Sheichan Bairoling Monastery.

Pashupatinath Temple is one of the holiest pilgrimage destinations for all the Hindus of the world. The temple is dedicated to Lord Shiva, one of the trinity and the guardian (patron) deity of Nepal. This is one of the oldest temples, situated on the banks of the holy Bagmati River. It is a double–roofed golden temple with four triple silver doorways. Pashupatinath covers an area of 281 hectares, which is one of the biggest temple complexes in Nepal.

Bouddhanath Stupa lies about 6 km east of downtown Kathmandu and it is the largest stupa in the Valley and one of the largest in the world. It presents one of the most fascinating specimens of stupa design with hundreds of prayer wheels and 108 small images of Buddha all around. Just like Swoyambhunath, this stupa has four sides with the watchful eyes of Lord Buddha. All the Buddhists throng to this stupa to take part in the sacred rituals during the Buddhist festivals.
Overnight: Monastery

Day 06: Visit Kopan Monastery: hike for about an hour to Kopan monastery through few villages and winding roads. Kopan is situated at a hill of Kathmandu valley about 2 km north from Boudhanath stupa. It is the first monastery in Nepal that started to teach Buddhism and Buddhist meditation in a foreign language.
Overnight: Monastery

Day 07: Flight Kathmandu to Pokhara (820m) and trek to Asthma: a scenic flight to Pokhara for about 30 minutes then drive about an hour to Milan chock followed by a short trek to Asthma, Adhikari family home. Being in Asthma, we can observe and experience the real culture and living style of the typical Nepali family of the countryside.
Overnight: Homestay

Day 08: Trek Asthma to Milanchok and drive to Sedi Bagar: hike back to Milan chock then drive for an hour to Sedi Bagar followed by another short walk to Thapa family home which offers a magnificent view of the lake and surroundings.
Overnight: Homestay
Driving Time: 1 Hour

Day 09: Visit Sarangkot (1592m): early morning drive to Sarangkot. it is about an hour's drive on steep uphill then 2 hours trek back. The view from Sarangkot is superb. Several different peaks of the Annapurna and Dhaulagiri ranges, including the two highest peaks in the world,-Annapurna I (8091m) and Dhaulagiri (8167m) can be seen.
Overnight: Homestay

Day 11: Visit Mountaineering Museum and Mahendra Cave: visit the first Mountaineering museum in Pokhara, where we can learn about the history of Nepal mountaineering and witness true mountaineering culture. In the afternoon, visit a cave; which is about 5 km away from Lake City. It is one of the longest caves in Nepal.
Overnight: Hotel

Day 12: Drive Pokhara to Lumbini: eight hours scenic drive to Lumbini, Birthplace of Buddha. In the afternoon, visit Maya Devi Temple's exact birthplace of Gautam Buddha. Maya Devi temple is built right on the place of his birth. The temple is built in modern design, however inside the temple; they have preserved the exact structure of the place/stone where he was born.

According to the legend, his mom, queen of Kapilbastu was going to her parent's house to visit her parents and all of sudden, she was struck with labor pain and she asked her servants to take her back to the palace but the pain was unbearable so she decided to rest under a banyan tree nearby where she gave birth Gautam Buddha.
We also visit some of the temples and stupas built by different nations dedicated to Lord Buddha.
Overnight: Hotel

Day 13: Visit Kapilbastu and Lumbini Garden: start our tour early in the morning driving about 28 km west of Lumbini to visit the palace of the Shakya dynasty.  Gautam Buddha spent 29 years of his life with his family in this palace as a prince. Even though he was a prince of the kingdom, he was different than rest of the royals and he was curious about the real world, which scared his family and his father, the king of Kapilbastu. King wanted his son to become a future king and rule the country so he wanted to train his son as a future king, not as someone who would go outside and try to get knowledge as a scholar and become a monk. So the king arranged all the physical luxury possible in the world right inside the palace so his son wouldn’t know about the poorness and cruelty of the real world outside of the palace.
In the afternoon, visit the rest of the temples in the Lumbini garden.
Overnight: Hotel

Day 14: Flight Lumbini to Kathmandu: a scenic flight back to Kathmandu enjoying the panoramic view of Himalayas.
Overnight: Hotel

Day 15: Visit Kirtipur: short drive to visit one of the oldest and historical towns in Kathmandu valley.
Overnight: Hotel

Day 16:   Transfer to the airport and departure 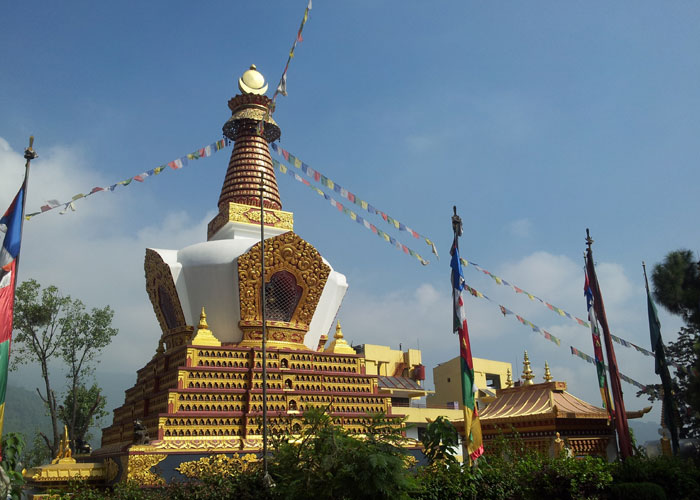 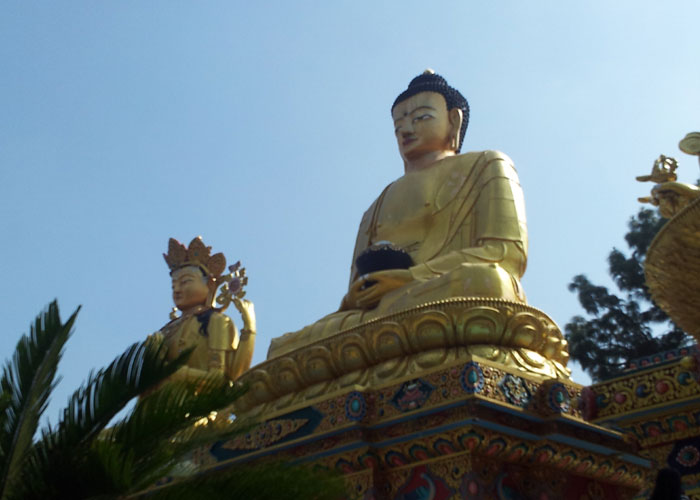 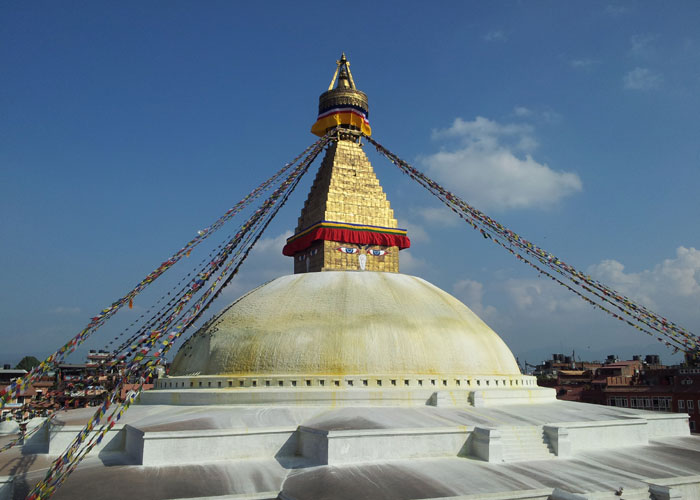 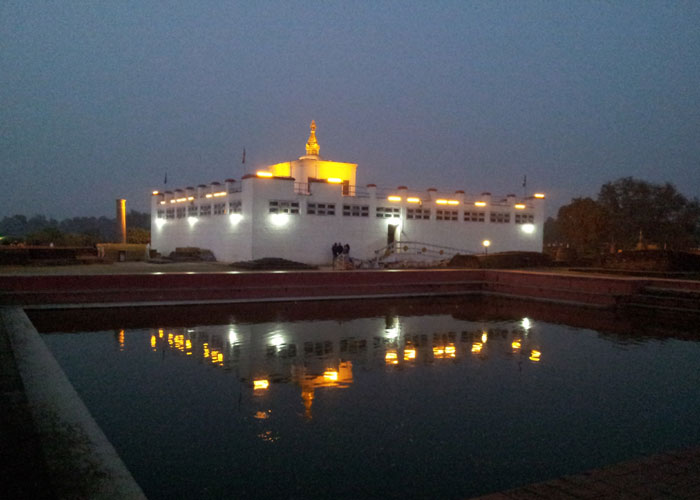