The Nepal Tibet tour takes you through varied landscapes, natural and cultural heritage sites. After visiting magnificent World Heritage Sites in Kathmandu, you will fly to Lhasa where the Potala Palace—the landmark and symbol of Tibet—the located. Your visit to the Palace—the highest Palace in the world—will fill you with awe for all your life. Such is its magnificence. The Palace is not merely a building—its architecture is par excellence, and it is a treasure trove of Tibetan ancient arts and crafts.

Tibetan history is well preserved. Also, you can learn about Tibetan Buddhism; it has many monasteries. Once atop it, you can have a brilliant view of Lhasa city and beautiful landscape far and wide. You will also visit Jokhang Temple and Norbulingka that come under the UNESCO World Heritage Site. The Sera Monastery—the last of the three Yellow Sect monasteries—will be quite a spiritual experience.

Visit other major cities, like Shigatse, Shegar, and Rongbuk is unmissable. Shigatse is the second biggest city in Tibet. The Shakya Monastery, popular for its fresco, will be an aesthetic experience. The Drepung Monastery, the largest and most powerful of the three major Yellow Sect monasteries, will be wonderful to see. Drive to the Gyantse will offer you with Pelkor Chode Monastery and Kumbum Stupa.

Further in Shigatse, you will be mesmerized by the famous Tashilunbo Monastery. Here wells the second most venerated religious leader of Tibet, Panchen Lama. You will be driven to Shegar crossing two high passes: Tropu La and Gyatso La. There will visit the ruins of historic Shegar Dzong.
Moreover, the journey to Dza Rongbuk Monastery will reward you with the views of the Makalu, the Lhotse, the Cho Oyu, and the Everest. You will pass through several beautiful villages, and trek to the Everest Base Camp.

Before reaching the last Tibetan town Nyalam, you will have majestic views of the Mt. Everest, the Sishapangma, and Cho Oyu.
The Nepal-Tibet tour will be your great experience since it has a lot to offer. It won’t be just a regular tour, besides thrill and adventure, you will get to learn about Tibetan history, Buddhism, arts, and cultures.

Day 01: Arrive in Kathmandu airport and you will be transferred to the hotel by one of our representatives. Welcome dinner at one of the traditional Nepali restaurants in Kathmandu.
Overnight: Hotel
Elevation: 1334m

Day 02:  Visit Boudhanath and Patan: start our tour with the magnificent stupa called Boudhanath which is 30 minutes drive from Thamel. Then we drive to Patan; to witness its incredible architecture from medieval period.

Boudhanath Stupa lies about 6 km east of downtown Kathmandu and it is the largest stupa in the Valley and one of the largest in the world. It presents one of the most fascinating specimens of stupa design with hundreds of prayer wheels and 108 small images of Buddha all around. Just like Swoyambunath, this stupa has four sides with the watchful eyes of Lord Buddha. All the Buddhists throng to this stupa to take part in the sacred rituals during the Buddhist festivals.

Patan - the second largest town in the valley is situated to the south of Kathmandu. Patan's great building boom took place under the Mallas in the 16th, 17th and 18th centuries. Numerous temples of widely diverse styles, as well as many Buddhist monasteries, are scattered around the fascinating town. Patan is famous for its crafts and metal works which are wonderful souvenirs.
Overnight: Hotel

Day 03: Drive Kathmandu to Pokhara (820m): a scenic drive to Pokhara for about 6 hours.
Overnight: Hotel

Day 05: Visit Sarangkot and Mountaineering museum: early morning drive to Sarangkot. It’s about an hour drive on winding road. The view from Sarangkot is superb. Several different peaks of the Annapurna and Dhaulagiri ranges, including the two highest peaks in the world,-Annapurna I (8091m) and Dhaulagiri (8167m) can be seen.

Then, we drive back to Pokhara and continue our tour visiting Mountaineering museum, which gives great opportunity to know about history of mountaineering in Nepal.
Overnight: Hotel

Day 06: Flight Pokhara to Kathmandu (1334m): a scenic flight back to Kathmandu for about 25 minutes which offers you panoramic view of Annapurna and Manaslu ranges.
In the afternoon, visit Swoyambunath and Kathmandu Durbar square.

Swoyambunath is one of the oldest stupas of the Kathmandu Valley. It is situated on one of the highest hills in the valley. It watches over the Valley from the top of a hillock on its western side just three kilometers west of the city center. The stupa is one of the holiest Buddhist sites in Nepal and its establishment is linked to the creation of the Kathmandu Valley out of a primordial lake. Swayambhu is also known as Samhengu and is recognized as a World Heritage Site. It is also one of the oldest and most glorious Buddhist shrines in the world which is said to be two thousand years. The four sides of the stupa are painted with the eyes of Lord Buddha.

The Kathmandu Durbar Square holds the palaces of the Malla and Shah Kings who ruled over the city. Along with these palaces, the square also surrounds quadrangles revealing courtyards and temples. The square is presently known as Hanuman Dhoka, a name derived from the statue of Hanuman, the monkey devotee of Lord Ram, near the entrance of the palace. The preference for the construction of royal palaces at this site dates back to as early as the Licchavi period in the third century. When Kathmandu City became independent under the rule of King Ratna Malla (1484-1520) the palaces in the square became the royal palaces for its Malla kings. When Prithvi Narayan Shah invaded the Kathmandu Valley in 1769, he also favored the Kathmandu Durbar Square for his palace. Other subsequent Shah Kings continued to rule from the square until 1896 when they moved to the Narayan Hiti Palace. One of the most visited sites   in the square    is the house of the Kumari (a living goddess who is the reincarnation of Kali).
Overnight: Hotel

Day 07: Fly Kathmandu to Gonggar Airport and drive to Lhasa. 3600 m, 90 km, 1.5 hrs: an hour flight to Lhasa will enchant you with the spectacular, breathtaking view of the Himalayan Ranges. You will see most of the highest mountains on earth including Mt. Everest. Arrive in Gonggar airport and take a 1.5-hour drive to Lhasa along the banks of the river Kyichu that flows through to Lhasa. The drive will take you to the west of the city at Dongkar, and just west of Dongkar the Potala Palace will be visible from afar.  At 3600m, it is advisable to take the rest of the day in leisure in order to acclimatize. You can go around the hotel area for light walk and sightseeing.
Overnight: Hotel

Day 08: Sightseeing of Potala Palace, Jokhang Temple and Barkhor Market:
This morning we visit the Potala Palace, winter palace of His Holiness the Dalai Lama, It is a 13th storied complex monument rising to a height of above 117m which houses 10,000 shrines and over 200,000 images and about 1000 rooms. In the afternoon we will take a tour of Jokhang Temple.  Jokhang a seventh-century geomantic temple at the heart of Lhasa is the most sacred temple of all Tibet. It is considered to be a Power Place in all Tibet. Queen Bhrikuti a Nepalese princess married to King Songtsen Gampo founded Jokhang Temple and in recognition of Queen Bhrikuti the main gate of the temple faces west towards Nepal. The most impressive structure of the Jokhang Temple is the many chapels surrounding the temple.  Later you can walk and shop in the popular Barkhor Square (Bazaar) where Tibetan handicraft items, Buddhist artifacts, carpets, paintings etc. are all in sale for your delight.
Overnight: Hotel

Day 09: Sightseeing of Drepung Monastery and Sera Monastery:
This morning we will drive 8km northwest of Lhasa to visit Drepung Monastery. It was the residence of the Third, Fourth and the Fifth Dalai Lamas.  This winter     Palace was the resident of hundreds of monks from all the major Geluk monasteries for staffing individual Chapels. The 20,000 sq m complex has survived unscathed even during the Cultural Revolution.  In the afternoon we will drive 5km away from Lhasa to Sera Monastery founded in 1419. It sits in the prettiest and most charming atmosphere at the base of Mount Purbuchok. Sera Monastery used to be an important center for learning where 5,000 to 6,000 monks resided. The most intriguing feature here is the nine-meter image of the monastery; here one can also witness the practicing debate among the monks, who pitch their knowledge against each other.
Overnight: Hotel

Day 10: Drive to Gyantse visit Khumbum Stupa. 3975 m, 255 km, 4/5 hrs:
We will drive over two spectacular high passes – the Khamba La at 5100m and Karo La at 5050m and over and along the beautiful deep blue green Lake called Yamdrok Lake or Turquoise Lake. The landscape of the Tibetan Plateau is truly unusual and spectacular.  We will arrive in Gyantse an old Tibetan Town against a backdrop of magnificent 14th-15th century fortresses and temples.  Here we will visit Pelkhor Chode Temple, which served the Gelug Sakya and Buluk orders. Here the Khumbum Stupa is an architectural masterpiece built in the style of 108-sided Mandela. It is the most revered Stupa in Tibet and houses 112 chapels of which only 23 are open to the public.
Overnight: Hotel

Day 11: Drive to Shigatse, Visit Tashilhunpu Monastery & Local Market. 3850 m, 90 km, 2 hrs:
After breakfast 2 hours, 90km straight drive to Shigatse the second largest town in Tibet. Shigatse the capital of Tsang Province is 345km west of Lhasa via Gyantse.  Shigatse was one of the first towns to be visited by westerners due to close distance with the Indian border.  Here, Tashilhunpu Palace is the place to visit.  His Holiness the Panchen Lama (great scholar), the second highest spiritual figure in Tibet after His holiness The Dalai Lama. The Fifth Dalai Lama built this artistic Palace. There are about 39 amazing chapels inside the Palace including the huge Maitreya Chapel coated with gold, its workmanship certainly impresses everyone, Tushita Chapel containing one thousand small statues of  Tsongkhapa founder of Geluk order. Victory Chapel, which is concerted into a school for study and inside the chapel there is a huge gold image of Tsokapa and his two disciples and also the Tomb of the Tenth Panchen Lama just to name a few.  In the afternoon, we will visit the local markets for shopping and local sightseeing.
Overnight: Hotel

Day 12: Drive to Shegar. 4050m, 244km, 4/5 hrs:
Driving from Shigatse to Shegar is approx 4/5 hours. You will be crossing one of the highest Ghyatso La Pass (5220) of the tour. You will come across many nomads together with Yaks & Sheep.
Overnight: Hotel

Day 13: Drive to Zhangmu. 2300m, 241km, 4/5 hrs:
After breakfast drive toward to the Friendship Highway and drive to Tingri from where you can see Mt. Everest, & Mt. Cho Oyu then continue drive past Tingri crossing Thong La pass at 5050m. Savoring the enchanting views of the surrounding peaks of Shishapangma, Cho Oyu, Menlungtse and Gauri Shankar, you descend from the arid Tibetan Plateau to verdant Zhangmu on the Nepalese border. After driving for 181 km, you find yourself amidst the lush and verdant vegetation of Zhangmu at  2300 meter
Overnight:  Hotel

Day 14: Drive back to Kathmandu. 1334m, 127 km, 4/5 hrs:
After Breakfast few kilometres drive follows Friendship Bridge along Bhote Koshi River to Immigration Control in Khasa Port where you part with your Tibetan guide and driver. After immigration formality we cross the Friendship Bridge and walk for 5 minutes to Nepal Immigration and  process for re-entry formalities to return to Kathmandu.
Overnight: Hotel

Day 15: Transfer to the airport and departure. 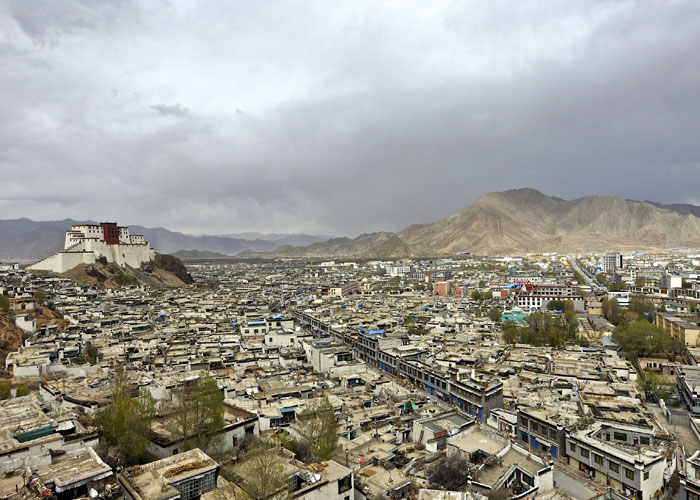 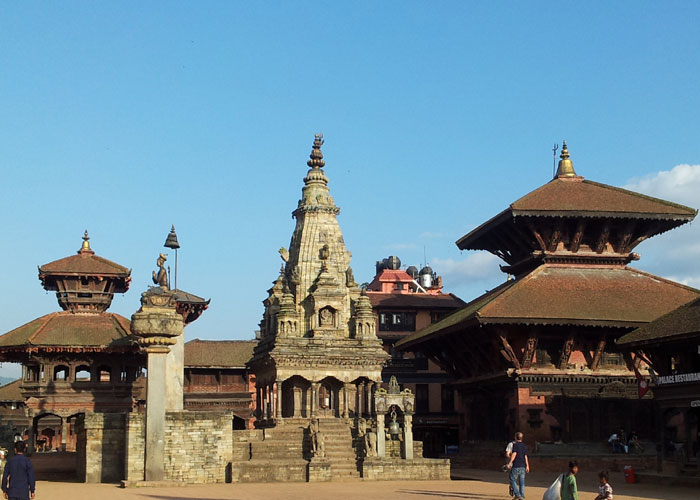 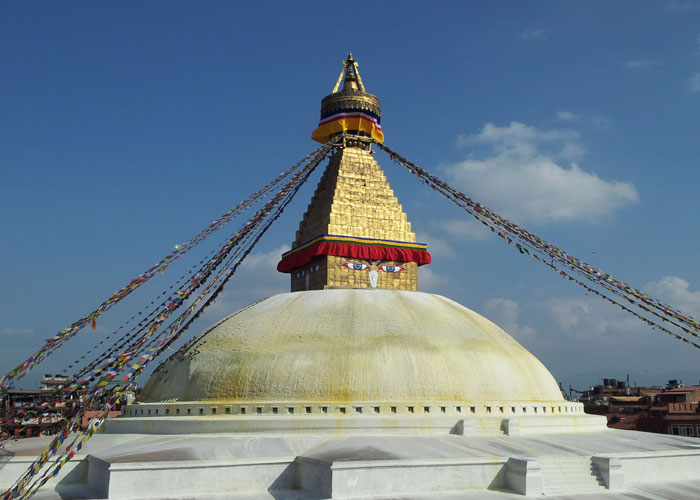