Tibet is the highest region on the Earth covering much of the Tibetan Plateau. Though the economy is dominated by agriculture, tourism has become an emerging industry, for it has exotic arts and architecture, and crafts, and culture that lures travelers around the globe. Admittedly, it has a distinctly glorious history for how it has come to be. Even Buddhism is practiced differently—it is distinctly known as Tibetan Buddhism which has greatly influenced art and music. Once you get here, you can experience all this in person. It is worth it.

The Potala Palace—14-storeyed with 1,000 rooms—has become almost synonymous with Tibet when it comes to tourism. Located in Lhasa, the Palace used to have living quarters for the Dalai Lamas. It was the religious and political center of Tibet. Now it also contains a copious amount of rare cultural relics, hand-written Buddhist scriptures, gifts, and antiques. In fact, it is a treasure trove arts, crafts, and history; also a UNESCO World Heritage Site. It will be your great learning experience and wonderment. Lhasa— ‘Land of Gods’—is the Capital of Tibet which has a lot to offer you. Your visit to the Jokhang Temple will leave you in awe—the most sacred and venerated religious artifact, the original statue of Jowo Sakyamuni Buddha resides here. Likewise, you will be equally mesmerized by the grandeur of the Norbulingka Summer Palace which hosts a small zoo, botanical garden, and a mansion. In addition, there are some famous monasteries—the Drepung Monastery is the head monastery that has its governing role, while the Sera Monastery is known for its tantric teachings. These sites will spiritually rejuvenate you. On top of that, the Tibet Museum will help you with the history of Tibet. You still have stupendous to explore!

Your journey to Shigatse via Gyantse will be quite an adventure—you will have to ascend the Khamba La pass at 4794 m from where you will have a stunning view of the snowy summit the Nazin Kang Sa and the splendid lake Yamdro-to. You will further ascend the Kora La at 5045 m to descend into Gyantse where you will visit the Khumbu Monastery and the Pelkhor Chode Temple. Then you will get to the second-largest city in Tibet, Shigatse. You will be impressed be yet another artistically rich monastery, the Tashilhunpo Monastery.

Day 01: Arrive in Lhasa (3490 m)
Arrival at Gongar airport, and transfer to your Hotel. It is advisable to take the rest of the day in leisure in order to acclimatize. You can go around the hotel area for light walk and sightseeing.
Overnight: Hotel

Day 02: Visit Potola Palace, Jokhang Temple and Bakhor Market (3490 m):
This morning we visit the Potala Palace, winter palace of His Holiness the Dalai Lama, It is a 13th storied complex monument rising to a height of above 117m which houses 10,000 shrines and over 200,000 images and about 1000 rooms.  In the afternoon we will take a tour of Jokhang Temple.  Jokhang a seventh-century geomantic temple at the heart of Lhasa is the most sacred temple of all Tibet. It is considered to be a Power Place in all Tibet. Later you can walk and shop in the popular Bakhor Square (Bazaar) where Tibetan handicraft items, Buddhist artifacts, carpets, paintings etc. are all in sale for your delight.
Overnight: Hotel

Day 03: Visit Drepung Monastery and Sera Monastery (3490 m):
This morning we will drive 8km northwest of Lhasa to visit Drepung Monastery. It was the residence of the Third, Fourth and the Fifth Dalai Lamas.  This winter Palace was the resident of hundreds of monks from all the major Geluk monasteries for staffing individual Chapels. The 20,000 sq m complex has survived unscathed even during the Cultural Revolution.  In the afternoon we will drive 5km away from Lhasa to Sera Monastery founded in 1419. It sits in the prettiest and most charming atmosphere at the base of Mount Purbuchok. Sera Monastery used to be an important center for learning where 5,000 to 6,000 monks resided. The most intriguing feature here is the nine-meter image of the Monastery; here one can also witness the practicing debate among the monks, who pitch their knowledge against each other.
Overnight: Hotel

Day 04: Visit Norblinka Palace, Ramoche Monastery and Tibetan Medical Centre (3490 m):
This morning we will visit to Norbulingka Palace which is also called the “Jewel Park”, is a large open area about four kilometers to the west of Lhasa, and referred to as the summer palace of the Dalai Lama. Since the time of the Eight Dalai Lama, the park has been used as a summer palace, retreat and recreation area for the successive Dalai Lamas. Then after, we will visit Ramoche Monastery. Ramoche monastery is considered to be the sister temple to the Jokhang which was completed about the same time. Tradition says that it was built originally to house the much revered Jowo Ringpoche Statue. Later we will visit to Tibetan Medical Centre. Which is one of the ancient herbal medical and astrological research institute as well as exhibition house of Tibetan medical artifacts; and the top floor had a shrine dedicated to Yutan Yonten Gonpa, together with Desi Sangye Gyatso and khyenrab Norbu, as well as a medical Thangka exhibition hall.
Overnight: Hotel

Day 05: Drive Lhasa to Gyantse: (3975m) 265 km 5 - 6 hrs
Leaving Lhasa and a long drive of 265 km, taking about 5/6 hours including break for lunch at one of the villages’ en-route. We will drive over two spectacular high passes – the Kampa La at 4750m and Karo La at 5050m, over, and along the beautiful deep blue green Lake called Yamdrok Lake or Turquoise Lake. The landscape of the Tibetan Plateau is truly unusual and spectacular.  We will arrive in Gyantse an old Tibetan Town against a backdrop of magnificent 14th-15th century fortresses and temples.  Here we will visit Pelkhor Chode Temple, which served the Gelug Sakya and Buluk orders. Here the Kumbum Stupa is an architectural masterpiece built in the style of 108-sided Mandela. It is the most revered stupa in Tibet and houses 112 chapels of which only 23 are open to the public.
Overnight: Hotel

Day 06: Drive Gyantse to Shigatse: (3840 m) 90 km 2 hrs
After breakfast, 2 hours, 90km straight drive to Shigatse the second largest town in Tibet. Shigatse was one of the first towns to be visited by westerners due to close distance with the Indian border.  Here, Tashilumpo Palace is the place to visit.  His Holiness the Panchen Lama (great scholar), the second highest spiritual figure in Tibet after His Holiness the Dalai Lama. The Fifth Dalai Lama built this artistic Palace. There are about 39 amazing chapels inside the Palace including the huge Maitreya Chapel coated with gold, its workmanship certainly impresses everyone, Tushita Chapel containing one thousand small statues of Tsongkhapa founder of Geluk order. Victory Chapel, which is concerted into a school for study and inside the chapel there is a huge gold image of Tsokapa and his two disciples and also the Tomb of the Tenth Panchen Lama just to name a few.  In the afternoon, we will visit the local markets for shopping and local sightseeing.
Overnight: Hotel

*Note: driving can be slow and you might have to wait en-route due to speed control. After reaching Tsedang check in to the hotel. Later visit Tandruk Monastery which is believed to be an oldest monastery founded at the same time as the Jokhang and Ramoche Monastery in Lhasa.
Overnight: Hotel

Day 08: Drive to Samye visit Samye Monastery later back to Tsedang visit Tomb of King
After breakfast we take de tour to Samye Monastery. Samye Monastery is the first Buddhist Monastery of Nginmapa order to be built in Tibet, probably founded during Shantarakshita, the two Indian masters the king had invited to Tibet to help consolidate the Buddhist faith. Later taken over by the Sakya tradition and more recently came under the influence of the Gelukpa. Later we visit Tomb of Kings at Yurlong Valley.
Overnight: Hotel 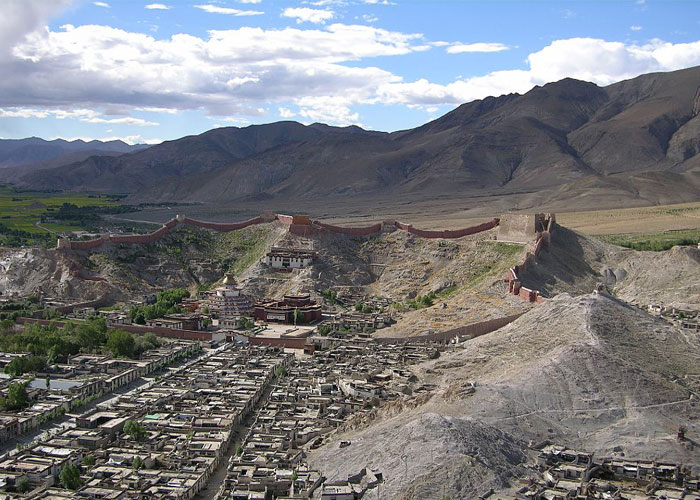