Governed as an autonomous region of China, Tibet is primarily a Buddhist territory. The Tibetan language is its primary language. It is popularly known as the roof of the world. It is geographically stunning, but at the mention of its name one’s brain is flooded with the ideas and images of Buddhism, and it is justifiably appropriate. Buddhism reached Tibet in the 7th century.

Though tourism brings in considerable revenue, its economy hugely depends on agriculture.
With an average elevation of 5,000 m, it is the highest region on Earth, covering much of the Tibetan Plateau and one-fourth of China’s territory. Lhasa is the Capital of Tibet.

The Potala Palace and the Norbulingka, once the residences of the Dalai Lama, are the world heritage sites in Lhasa. Jokhang and Ramoche Temple are important monasteries there.

Tibetan art, which you will find awe-inspiring, is deeply influenced by Tibetan Buddhism. Appealingly vibrant thangka paintings and mandalas mainly depict various forms of Buddha. Likewise, the architecture too is molded by Buddhism. There you will see the Buddhist wheel with two dragons on almost every Gompa. The Chortens vary from roundish to squarish. You will be amazed by their distinctly built houses to conserve heat and let enough sunlight in. With over one thousand rooms, the 13-storied Potala Palace is an architectural exemplary. It will leave you in absolute in awe.

You would certainly love to have their cuisine. Barley being the most important crop, momos and tsampas is a staple food. Meat dishes are exclusively from yak and goat. You will relish yak yogurt, butter, and cheese. In fact, butter tea is unmissable.

It is a great opportunity for you to explore the cultural and natural riches of Tibet. Fine arts of the monasteries in Lhasa will amaze you. You will learn a lot about Tibetan Buddhism. The people in ancient villages, some of which you will be driven across, seem to have a nomadic lifestyle. All in all, it will be a terrific experience!

Day 01: Arrive in Lhasa (3490 m):
Arrival in Gongar airport; and you will be met by our representative and transfer you to your Hotel. It is advisable to take the rest of the day in leisure in order to acclimatize. You can go around the hotel area for light walk and sightseeing.
Overnight: Hotel

Day 02: Visit Potola Palace, Jokhang Temple and Bakhor Market (3490 m):
This morning we visit the Potala Palace, winter palace of His Holiness the Dalai Lama, It is a 13th storied complex monument rising to a height of above 117m which houses 10,000 shrines and over 200,000 images and about 1000 rooms.  In the afternoon we will take a tour of Jokhang Temple.  Jokhang a seventh-century geomantic temple at the heart of Lhasa is the most sacred temple of all Tibet. It is considered to be a Power Place in all Tibet. Later you can walk and shop in the popular Bakhor Square (Bazaar) where Tibetan handicraft items, Buddhist artifacts, carpets, paintings etc. are all in sale for your delight.
Overnight: Hotel

Day 03: Visit Drepung Monastery and Sera Monastery (3490 m):
This morning we will drive 8km northwest of Lhasa to visit Drepung Monastery. It was the residence of the Third, Fourth and the Fifth Dalai Lamas.  This winter Palace was the resident of hundreds of monks from all the major Geluk monasteries for staffing individual Chapels. The 20,000 sq m complex has survived unscathed even during the Cultural Revolution.  In the afternoon we will drive 5km away from Lhasa to Sera Monastery founded in 1419. It sits in the prettiest and most charming atmosphere at the base of Mount Purbuchok. Sera Monastery used to be an important center for learning where 5,000 to 6,000 monks resided. The most intriguing feature here is the nine-meter image of the Monastery; here one can also witness the practicing debate among the monks, who pitch their knowledge against each other.
Overnight: Hotel

Day 04: Drive Lhasa to Tsedang (3100m - 3400m) 3 – 4 hrs, De tour to Samye Monastery:
Drive to Tsedang approximately 2 hours drive form Lhasa. Tsedang is the third largest town in the central Tibet and considered historically very significant. Mount Lhababri on the west side of the valley is regarded as the place where the first Tibetan King of the Yurlung Dynasty, Nyatri Tsenpo arrived from the heavens (or from India) to rule among men. Later we take de tour to Samye Monastery. Samye Monastery is the first Buddhist Monastery of Nginma order to be built in Tibet, probably founded during Shantarakshita, the two Indian masters the king had invited to Tibet to help consolidate the Buddhist faith. Later taken over by the Sakya tradition and more recently came under the influence of the Gelukpa.
Overnight: Hotel

Day 05: Drive Tsedang to Gyantse: (3975m) 265 km 5 - 6 hrs:
After breakfast we visit Tandruk Monastery which is believed to be an oldest monastery founded at the same time as the Jokhang and Ramoche Monastery in Lhasa.

Later leave from Tsedang which is a long drive of 265 km, taking about 5/6 hours including break for lunch at one of the villages’ en-route. We will drive over two spectacular high passes – the Kampa La at 4750m and Karo La at 5050m, over, and along the beautiful deep blue green Lake called Yamdrok Lake or Turquoise Lake. The landscape of the Tibetan Plateau is truly unusual and spectacular.  We will arrive in Gyantse an old Tibetan Town against a backdrop of magnificent 14th-15th century fortresses and temples.  Here we will visit Pelkhor Chode Temple, which served the Gelug Sakya and Buluk orders. Here the Kumbum Stupa is an architectural masterpiece built in the style of 108-sided Mandela. It is the most revered stupa in Tibet and houses 112 chapels of which only 23 are open to the public.
Overnight: Hotel

Day 06: Drive Gyantse to Shigatse: (3840 m) 90 km 2 hrs
After breakfast 2 hours, 90km straight drive to Shigatse the second largest town in Tibet. Shigatse was one of the first towns to be visited by westerners due to close distance with the Indian border.  Here, Tashilumpo Palace is the place to visit.  His Holiness the Panchen Lama (great scholar), the second highest spiritual figure in Tibet after His Holiness The Dalai Lama. The Fifth Dalai Lama built this artistic Palace. There are about 39 amazing chapels inside the Palace including the huge Maitreya Chapel coated with gold, its workmanship certainly impresses everyone, Tushita Chapel containing one thousand small statues of Tsongkhapa founder of Geluk order. Victory Chapel, which is concerted into a school for study and inside the chapel there is a huge gold image of Tsokapa and his two disciples and also the Tomb of the Tenth Panchen Lama just to name a few.  In the afternoon, we will visit the local markets for shopping and local sightseeing.
Overnight: Hotel

Day 07: Drive Shigatse to New Tingri (Shegar): (4300m) 300km 7-8 hrs
Today we drive 300km. The friendship highway takes about 7/8 hours to reach Old Tingri. We will lunch in Lhatse, which is about 150 km away.  Lhatse is a small relatively modern town in the banks of the river Tsangpo.  Lhatse Dzong is an old town of Lhatse, where few monastery of Lhatse Chode were founded at the time of the Fifth Dalai Lama. The most significant historical site in Lhatse Dzong is the small meditation cave located in the northern face of Dzong (castle). Tingri is further 150km west of Lhatse.  On the dirt highway we will cross the high pass of Gyatso La or Lhakpa La 5220m. On the decent, if the weather permits you will have the first view of mighty Mt. Everest south face and other prominent mountains of the world.
Overnight: Hotel

Day 08: Drive New Tingri (Shegar) to Nyalam (3750m) or Zhangmu (2500m) 125km 3/4 hrs:
Today we drive 95 km 2 to 3 hours to reach Nyalam. On the way to Nyalam we may catch a glimpse of the majestic Mt. Everest and other peaks over 8000m such as Shisapangma.  Today, the difference in landscape is quite special-the barren rugged landscape of Tibet to the mighty Himalayas, where the scenery changes to rich forests, typical of the Nepalese foothills.From Nyalam 30 km to reach Zhangmu which is a small border town teetering on a precipitous hillside.  It serves as the main port of entry into Tibet when coming overland to and from Nepal.
Overnight: Hotel

Day 10: Transfer to the airport and departure. 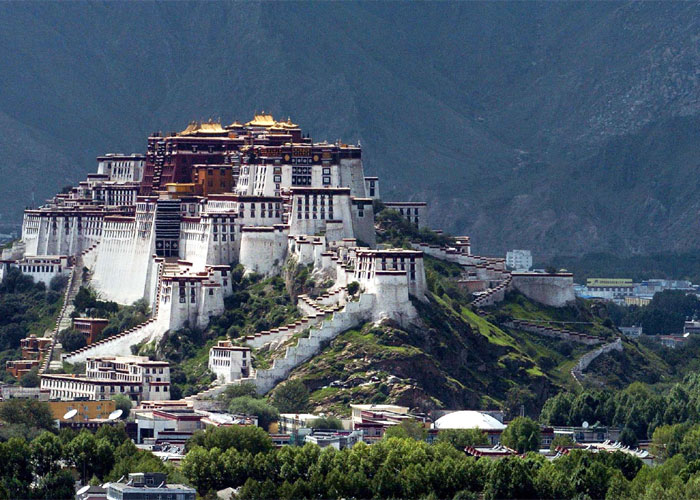 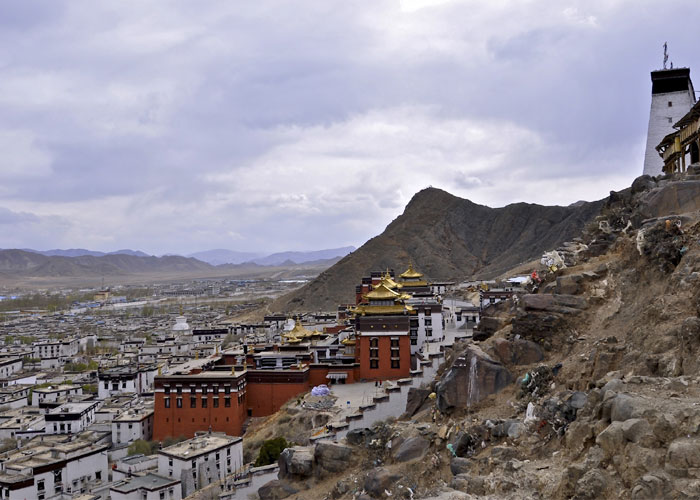 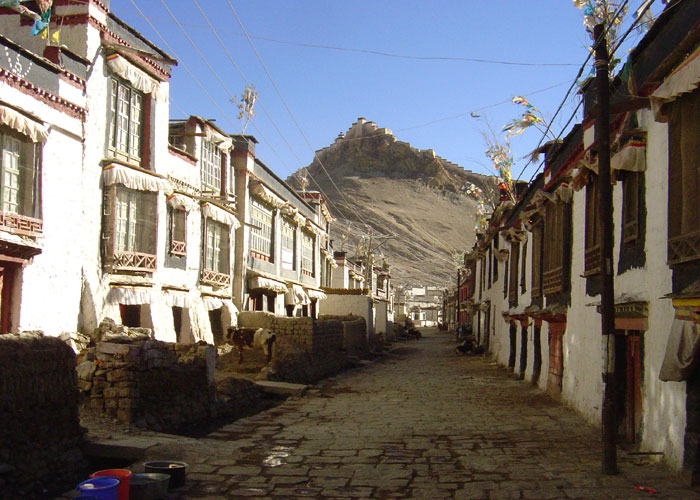